The majority of industrial plants have heating, drying, and/or humidifying processes, and the equipment that perform these processes generally use steam. Steam is used in such plants with the aim of producing high quality products efficiently. To ensure that steam-using equipment runs efficiently and consumes as little energy as possible, plants need to ensure the following:

Below are six ways of making your steam-using equipment run more efficiently. 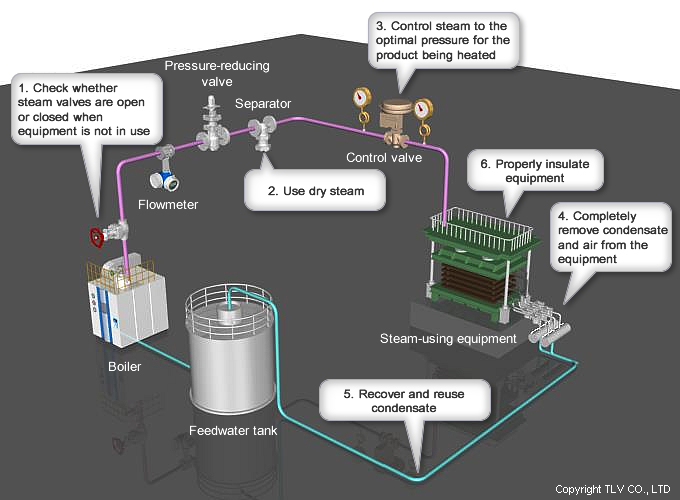 1. Check whether steam valves are open or closed when equipment is not in use

If, as is often the case, the steam-using equipment is located far away from the boiler, steam will lose heat and partially condense as it passes through the piping. Some of this condensate may get reintroduced into the steam flow as entrained moisture (“wet steam”).

3. Control steam to the optimal pressure for the product being heated

Steam-using equipment is often used to heat products of varying volumes and temperatures within a specified timeframe. It may seem logical to use the highest pressure steam available to increase production times, however, this is not recommended for two reasons:

To ensure that your equipment always heats the product at the optimal temperature, install a temperature, pressure, or flow controlling valve on the inlet side of the equipment, and use an automatic control system to keep the steam at an optimal pressure at all times.

Note that steam should be distributed at a higher pressure to minimize distribution pipe sizes. A pressure reducing valve and/or control valve will then reduce the steam pressure to be delivered to the steam-using equipment at the desired value.

4. Completely remove condensate and air from the equipment

If condensate and air are trapped within the steam space of equipment, they can impede the heating process. To remove air and condensate automatically, TLV recommends installing a steam trap that can vent air and other incondensable gases. Additionally, an air vent for steam should be installed with equipment that, due to its structure, traps air in remote locations.

The condensate that forms within steam-using equipment still contains a significant amount of sensible heat and is already treated water, so users should consider the potential benefit of recovering and reusing it.

It is important to insulate steam-using equipment, as well as steam lines and condensate recovery lines, to minimize the amount of heat radiated to the atmosphere during operation. Choose materials and economical thicknesses that conform to local regulations when applying insulation.

Reduce the Amount of Steam Required to Produce a Single Product

By comparing the amount of steam used in the production process to the amount of products produced, users can discover exactly how efficiently their plant is operating. It is recommended that plants aim to reduce the amount of steam that it takes to produce a single product each year by following the steps outlined above.

To judge how efficiently the plant is operating, users need to measure steam mass flowrate. It is also useful to measure the mass of steam used by equipment during operation and in between batches.

Users should aim to reduce the amount of steam used by equipment during shutdown. Additionally, by continuously monitoring steam flow, users can quickly identify problems such as steam leaks.