Steam System Winterization: How to Protect Your Plant

When winter approaches, those of us who live in cold climates start preparing for several months under snow and ice. For some people, this means switching to winter tires or stocking up on firewood at home. But what about your plant's steam system?

Proper winterization will help protect a steam system through the season to minimize steam- or condensate-related problems in production, prevent plant downtime, and keep the system in good condition come springtime!

Here are the steps that you should take to prepare your plant for winter.

Remember: it's not too late to take action!

The easiest and most reliable method of preparing your system for winter is by enlisting the help of a steam specialist engineer.

On a clear winter day, steam leaks can be easily spotted around the plant, hinting at locations for maintenance at the next available timing.

Identifying cold or low-temperature steam traps may be more difficult than looking for steam leaks, but performing maintenance on these locations is critical to preventing freezing inside the steam and condensate system.

Putting this work off until warmer weather arrives leaves the potential for trouble during winter.

Scheduling a steam trap survey ahead of winter and giving your steam system a clean bill of health will maximize production opportunities and reduce the risk of downtime and maintenance, while also securing energy savings by eliminating costly steam leaks.

TLV steam trap surveys are performed using our renowned TrapMan® hardware, the most accurate steam leak detection tool on the market. TrapMan® takes ultrasound and surface temperature measurements, which are then compared to empirically obtained trap data from over 4,200 steam traps to provide a judgement of the measured trap's operating condition.

A steam trap survey and report can provide an overview of not only the plant's steam trap population, but also areas where further action should be taken to prevent damage to equipment and piping vulnerable to winter conditions.

Steam traps installed on steam lines can be responsible for leaking steam for one of the following reasons:

As conventional trap types leak large volumes of steam over their lifecycle, plants can benefit financially from replacing these traps with TLV Free Float® models immediately rather than waiting until conventional traps fail.

Inherent to their operation, steam traps are installed on low-points of a steam system where condensate tends to collect. Large amounts of radiant heat loss make them prone to freezing, especially when installed on outdoor lines.

So, is it OK to insulate all steam traps without regard to the conditions? Actually, no—there are some trap types, such as disc-type thermodynamic traps, which can remain shut for extended periods of time when insulated and prevent the discharge of condensate from the application.

TLV's Free Float® steam traps open and close based only on the change in water level inside the trap, therefore insulating the trap has no adverse effects on operation. Insulation helps to prevent Free Float® traps from freezing especially while not in operation, when the trap does not contain hot condensate.

Steam transport piping should also be insulated to prevent steam losses due to radiant heat. Further, it is important to insulate piping accessories with large surface areas, such as isolation valves and pressure reducing valves.

Steam is supplied to the inlet of a steam trap, so the inlet piping should also be insulated to prevent radiant heat losses.

In severe cases, steam lines susceptible to heat loss may freeze and become occupied with ice. Ice imparts strong hydraulic forces on piping as it expands as water freezes, which can lead to burst pipes or piping components.

'Cold' (or blocked) steam traps no longer drain condensate, usually for one of two reasons:

When steam traps are unable to discharge condensate, it backs up in the piping upstream of the trap, causing the surface temperature to drop, hence 'cold traps.'

When the trap discharge capacity is insufficient, condensate will backlog and the surface temperature of the trap will drop.
(When backlog occurs, the trap inlet temperature will not appear as hot as shown above.)

Cold traps are a problem in all seasons due to the increased risk of water hammer. When not removed properly, condensate will eventually back up into the drip leg and steam transport piping, potentially causing damage downstream.

In small quantities, condensate entrained in steam can do damage by erosion to piping, valve trim or critical equipment such as turbine blades.

In large quantities, the condensate will form a slug, which when carried by steam at high velocity can do damage to piping and ancillaries. This is known as condensate-induced water hammer.

In colder weather, condensate backlog in the trap inlet piping can freeze, leading to burst piping in addition to the risk of water hammer.

For this reason it is important to survey the steam trap population ahead of winter, but regular steam trap surveys should be performed with particular attention paid to cold traps, in order to mitigate risk to plant production and promote safe and reliable operation.

Tracing systems are commonly found in process facilities on steam-using equipment or process media piping. Steam tracing lines are used to keep process fluids warm in situations where solidification or crystallization might otherwise occur, or when low ambient temperatures render them liable to freezing.

In tracing systems, thin, commonly copper tubing is wrapped around or run parallel to a process fluid line. The tubing carries steam from a dedicated source to heat instrumentation, before returning to a condensate header or manifold to discharge condensate from the tracing system.

For particular low temperatures, heat tracing systems should be combined with insulation for maximum effect.

To avoid condensate pooling in steam lines, make sure a steam trap is installed at low points in the line.

Non-freeze valves, also known as pre-freeze drainage valves, can be installed on the line directly, or as an attachment to steam traps in place of the drain plug. These allow condensate to be discharged from the trap once steam supply has stopped and pressure within the trap falls to about 0.02 MPaG [approx. 3 psig], at which point the non-freeze valve opens.

Condensate pumps and pump/traps may also assist in draining condensate from systems where an insufficient pressure differential exists, and in returning condensate to elevated lines.

Design steam-using equipment to prevent freezing and other problems

Steam-using equipment can also be subject to damage during winter. For example, internal components such as steam coils in air heaters may freeze when condensate is not effectively drained for a design-related reason.

For example, air heaters and heat exchangers are often designed with temperature control valves ahead of the equipment. When steam demand loads decrease and the control valve throttles down steam pressure, steam in the exchanger continues to condense and can form a vacuum. This vacuum will prevent condensate from draining from the exchanger, leaving it vulnerable to freeze damage.

In such cases, a vacuum breaker installed on the steam space of the heat exchanger can promote gravity drainage. This arrangement can help mitigate issues from condensate accumulation, freezing, and the accompanying downtime and maintenance.

Group trapping is also an indirect cause of freezing damage in steam-using equipment. When one steam trap is installed to service multiple steam coils, for example, the pressure imbalance caused by uneven condensing loads on the different sections of the equipment can prevent condensate from being properly discharged. 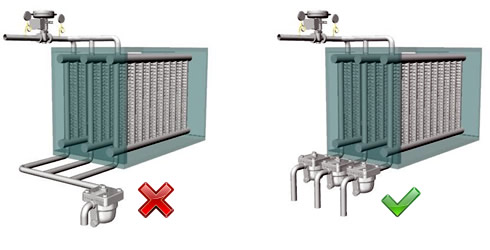 Group trapping can lead to waterlogging and water hammer damage, damage from coil stratification, uneven drainage, and corrosion damage. In winter, waterlogged coils can freeze, causing equipment damage at a time where operation of the equipment is most needed.

To avoid frozen coils, always install a single trap for each section of the heat exchanger.

We hope that the above information has helped you gain a deeper understanding of how to winterize your steam system. If you want more tips and hints, take a look at the other content on our site, including our Steam Theory articles and webinar recordings! TLV also offers consulting services that can help with all of these issues—from working out where to install traps or valves to inspecting pipes for leaks. Remember, when it’s cold outside, don’t wait until your equipment is damaged before taking action.

Is your plant ready for winter?
Contact us to apply for a steam trap survey.