How Bimetal-Type Thermostatic Steam Traps Work: A Look at their Mechanisms and Merits

A “bimetal” is a thermostatic element composed of two dissimilar metal plates bonded together. These dissimilar metals have different thermal expansion coefficients and when subjected to a change in temperature, the element begins to deform.

Bimetallic steam traps make use of the deformation of the bimetallic element to open or close a valve head.

Saturated steam remains at a constant temperature as long as the pressure does not change, but condensate will over time lose heat and cool even while its pressure remains constant. Bimetallic steam traps operate by utilizing temperature changes in the condensate. They have a simple structure and easy-to-understand working principle.

Because bimetallic elements have the ability to convert temperature changes into mechanical movement, they are also widely used in other equipment as temperature switches.

Therefore, even if steam pressure changes, the position of the bimetallic element inside a steam trap will not change until there is a change in the temperature of the condensate that surrounds it. 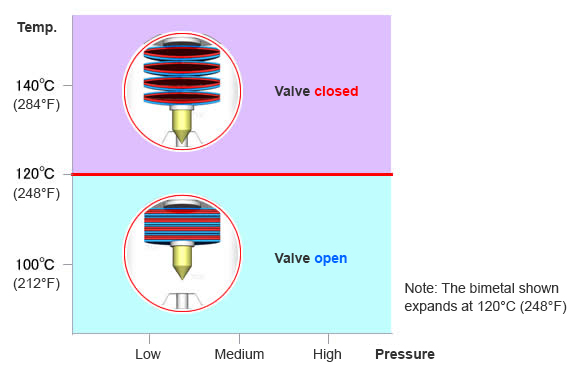 This fixed discharge temperature can be either an advantage or disadvantage for a steam trap depending on the type of application.

As an example of steam traps that take advantage of a fixed discharge temperature, let us look at the temperature control traps used in low-temperature steam tracing applications.

As temperature control steam traps open when the temperature drops below a fixed point, one can intentionally set that point to be far lower than the saturated temperature of the steam. This will cause condensate to accumulate on the inlet side of the trap until it cools to the set temperature. The idea behind this is to utilize the sensible heat available from the accumulated condensate to heat the equipment or product.

Steam tracing is often employed to protect meters or instrumentation from freezing, and to heat liquids with high viscosity and ensure smooth flow through pipelines. 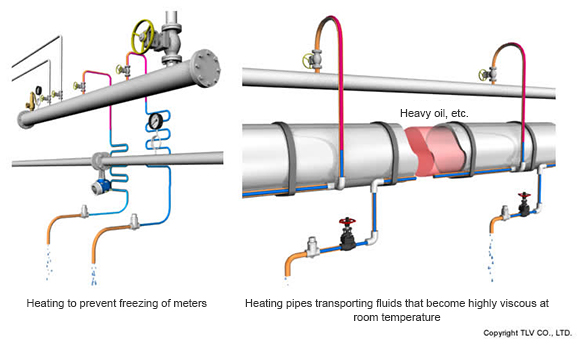 Due to the design of these traps, a certain level of condensate accumulates when the discharge temperature is properly set below the steam saturation temperature. Though the trap begins to open at the set point, the accumulated liquid must further subcool (cool below the boiling point) to allow the trap to fully open and reach its full drainage capacity. If discharge temperature is significantly lower than the steam temperature, condensate may begin to backup too far, which could lead to production and reliability issues or even induce water hammer in steam mains.

In the opposite case, where discharge temperature is higher than the steam saturation temperature, the steam trap will fail to close, resulting in a continuous loss of steam.

Naturally, bimetal steam traps will not operate correctly when the discharge temperature is set at or near steam temperature.

Because of these limitations, bimetallic steam traps are unfit for use on steam transport lines or other critical equipment, where rapid ejection of condensate is required.

There are many bimetallic trap models with different design characteristics. In particular, the shape and location of bimetal elements and valves can vary between traps.

Certain designs make the bimetal element more susceptible to "fatigue" (wear or even cracking) than others. For example, a downstream valve head design must overcome the system’s backpressure, which increases the stress on the bimetallic elements and decreases the discharge temperature of the valve.

A steam trap with a fixed drainage temperature can only be used in a system operating at a limited pressure range. To remedy this problem, bimetallic steam traps generally have an adjustment screw to modify the drainage temperature. However, such traps must be adjusted according to system conditions before use, and do not automatically adapt to unexpected changes. For these reasons, bimetallic steam traps are only suitable for specific applications and selection should be carefully considered.

Still, the bimetal itself is widely used as a supplemental element in other types of steam traps such as float, inverted bucket, and disc types. These bimetals are mainly used as air vents, or to allow the trap to drain large condensate loads at start-up and residual loads at shut-down.