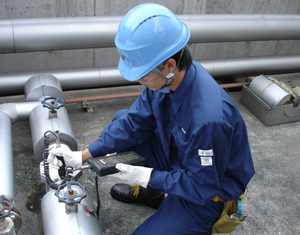 Singapore Refining Company (SRC), one of three petroleum refineries in Singapore, was suffering from a large number of trap failures in 2003. A survey conducted by TLV showed that trap failure rate was around 50%. This represented significant annual monetary losses from steam leaks alone.

The plan was put into action over the next few years, resulting in tremendous success. The steam trap failure rate had dropped to less than half in 2004 (compared to 2003) and progressively declined to reach an all-time low of less than 5% in 2010.

The Manager of Energy & Loss Control at SRC was very satisfied with the program. He added that TLV’s Trap Management System lead to “significant improvement in energy conservation through steam loss reduction and better steam trap performance.”

The end result was that SRC was not only able to conserve a significant amount of energy and reduce its carbon footprint, but also achieve large savings through better steam trap management.